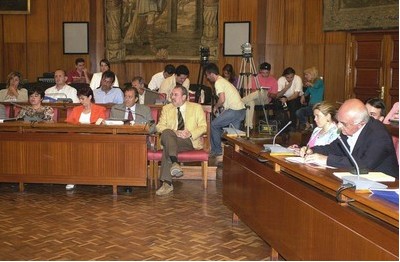 According to the Spanish Constitution, political parties represent the political pluralism of society; they are an instrument of the popular will and a vehicle through which citizens can participate. Citizens should feel free to create political parties and carry out activities within the latter, so long as they respect the Constitution and the Law and ensure that their party has an identifiable internal structure and is governed by the principles of democracy. The law establishes a series of norms which regulate the relationships of all political groups with the Council. These are six fundamental norms:

1. Members of local councils belong to groups. Nobody can belong to more than one group/political party, simultaneously.

3. The President informs the Plenary Council of the formation of the political groups, their members and speaker, at the first session celebrated after the deadline. The members of the corporation who obtain their membership after the constitutional session should join the relevant political group in accordance with specified rules.

4. Every political group should have an office in the Council headquarters where they can meet independently and receive visits from citizens. The President or Council member responsible for internal affairs should ensure that each political group has a basic infrastructure comprising material and human resources.

5. Political groups can use the Council’s headquarters to hold meetings or work sessions with different associations to defend citizens’ collective, general or sectorial interests. The President or person responsible for internal affairs should establish a series of norms regarding the utilisation of Council property by the different groups it comprises, taking into account the need for functional coordination and paying respect to the different levels of political representation of each group. This type of meeting is not permitted during Plenary sessions or sessions of the Government Commission Board.

6. The speaker of each political group must indicate, in a written document addressed to the President and in accordance with specified norms, the names of the members who should represent them in the collegiate bodies comprising members of the Council from the diverse political groups.