The Institution
History
Provincial Intendancies of the 18th Century 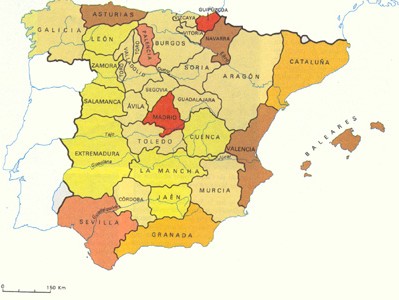 The crowning of Philip V in 1701 brought a greater concentration of political power into the King’s hands, so much so that the state (in so far as its territorial dimension and its people were concerned) was considered part of the King’s dominion. The structure of the Spanish state was determined by new decrees, which unified the judicial-public sphere and abolished longstanding state administrative institutions. This situation was favoured by the utilisation of Roman law and the suppression of state Courts. 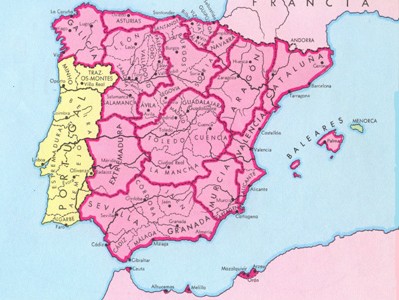 The creation of the different Secretariats (Ministry of War, Tax, Marine Affairs, Justice, etc.) and Intendancies and the reforms made to municipal regimes were decisive factors in centralising political power in the King’s hands. The Intendancies of the province were established for the same reason that the General Captaincies were established at the end of the Succession Wars (1701-1714). Spain had learned important lessons from France, including the fact that provinces required public servants to carry out administrative and management tasks. From 1718 onwards, Spain was divided into ‘intendancies’, which varied in size and which coincided with traditional administrative divisions (viceroyalties, general captaincies, etc.). The governments were divided into ‘parties’ (‘partidos’), whose territorial boundaries coincided with those of the districts and counties of the Habsburg era. Smaller subdivisions include ‘valles’, greater mayorships, etc. Finally, in the times of Charles III (1759-88), it was proposed that Spanish territory should be regularly divided into provinces before a Tribunal.

In an attempt to rationalise territorial division, the intendancies were entrusted with an array of duties including taxation, war, justice and policing, though soon, their jurisdiction would clash with those of the chief magistrate of the province. Later, under Ferdinand VI, the intendant also became the chief magistrate of the province, while the rest of the magistrates were relegated to carrying out bureaucratic tasks for the town hall. The intendants wielded authority over almost all issues affecting the government and administration of a province. They were some of the most efficient officials in the political policy of “the century of light”. The office of the Provincial Intendant went through two different phases. The first coincided with the War of Succession and saw Phillip V (via a Decree of 3rd April, 1711) naming various general superintendents of the armies, who operated within territorial delimitations after the military occupancy, carrying out administrative tasks for the army, organising tax matters and making decisions on provincial expenses. After the war, via the Royal Resolution of 1st July, 1718, the intendants would receive the title of Provincial and Army Intendants, and their authority was definitely established by the promulgation of the Order Regarding Intendant Magistrates of 13th October.

As the predecessor of the governor (an office introduced in the 19th century alongside the new division of the territory into provinces), the Intendant had the mission of promoting the economy, work and industry (factories, material and other arts of mechanical trades), commerce, animal husbandry, agriculture, communication and transport, in addition to carrying out functions in the areas of taxation and war. Intendants also played an important role in carrying out censuses and controlling land registries (such as that of the Marqués de la Ensenada, 1750-51). Further down the line, they collaborated with the Count of Floridablanca on the publication of “Spain divided into provinces and local governments. Nomenclature”. This was the first publication indicating the political-administrative division of Spain (1785-89), which was divided into 79 sizeable jurisdictional ‘parties’, into which the provinces were grouped in accordance with fiscal aims. The intendants would be the representatives of the King and the Central Government in each of the 31 peninsular provinces, and as early as the 19th century, they were entrusted with creating their own geographical maps (Coello, 1833), indicating Crown land, monasteries and private land, as well as rivers, pasture lands and walkways. The intendants also took the first steps towards the creation of the important work, the Dictionary of Madoz (1840).

Interestingly, in official superior intendant Juan Antonio Estrada’s “General Population of Spain, its Kingdoms and Provinces, ‘villas’, ‘pueblos’, adjacent islands and African prisons” (which relied on data from the previous century and news from the 17th-18th centuries) the name of Málaga fails to appear, since until the year 1801, the territory it now comprises was divided between the kingdoms of Granada and Sevilla (Córdoba and Jaen were the other two Andalusian provinces). The kingdom of Sevilla comprised: Teba, Cañete la Real, Archidona, Estepona, Hardales y Sierra de las Yeguas. Granada was made up of: Málaga, Ronda, Antequera, Fuente Piedra, Marbella, Torre del Mar, Vélez-Málaga, Comares, Coín, Alora, Alhaurin, Cártama, Casarabonela, Casa Bermeja, Almoxia, Alhaurinejo or Alhaurin el Chico, Colmenar, Río Gordo, Torrox, Nerja, Frigiliana and Monda. The area comprising Melilla tends to be included within the province of Málaga, largely because since its conquest in 1497, it depended on Málaga on various levels. Málaga provided vital supplies and manpower to Melilla and served the latter as a vital maritime link.

Both the Census of Floridablanca (José de Moñino, 1728-1810) and the study of Juan A. Estrada indicate that the majority of what is now Málaga was once considered part of Granada: six cities (including Melilla), 53 ‘villas’, 25 ‘lugares’ and 10 ‘pueblos’, in addition to the six ‘villas’ and two ‘lugares’ belonging to the Kingdom of Sevilla