The Council
Process of Election 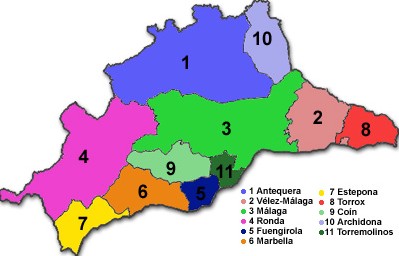 The number of provincial deputies corresponding to the Provincial Council of Málaga, calculated in accordance with the number of residents in the province, is 31.

The Council is made up of 31 members, whose number is determined by the census of residents of the province and is proportional to the number of electoral boards in each zone in which the various Town Halls are located. Once the local elections took place and councillors were elected for the Town Halls, each political group chose a number of provincial deputies from among the councillors of the electoral boards of each zone. Finally, the President of the council was elected by majority during an extraordinary plenary session from among the deputies.

The governmental organs of the council are:

The election of the deputies is an indirect process carried out by judicial parties from among the municipal councillors of the province. All candidates must be municipal councillors before being eligible for the post of provincial deputy.
The Provincial Electoral Boards allocate a specific number of posts (in proportion to the number of residents) to each of the 11 judicial districts of the province of Málaga, on the 10th day after elections take place, in accordance with the following rules:

In order to distribute the deputies, the Electoral Board connects the number of parties, coalitions, federations or groups which are present at the local elections, to the number of votes obtained in each of the 11 judicial districts. The deputies are distributed in accordance with the D’Hont Method. The councillors are convened independently according to their respective political parties, so the latter can select those who will represent them at the Corporation’s Plenary Session.

Once the assignation of deputy posts has taken place, the Electoral Board separately convokes the councillors from the political parties, coalitions, federations and groups, to elect deputies from the list of candidates. Three substitutes must also be elected in case the posts of deputy become vacant.

Once elections have taken place, the Area Board proclaims the deputies to have been elected and names their substitutes.

The Provincial Council meets during a constitutive session presided over by an Interim Board which comprises older and younger deputies present during the act. The Secretary of the Council acts as secretary during the election of the President.

Likewise, the President can cease to hold his post following a loss of confidence regarding an issue he has put forward to the Plenary Council, in relation to the approval or modification of any of the following issues: