The Institution
History
The First Session 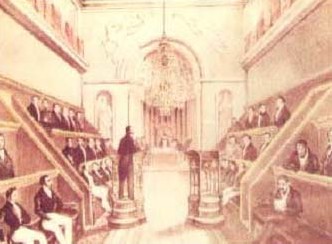 When the Royal Decree concerning the territorial division of Spain was published in November, 1833, some 49 provinces were created and modified according to their traditional delimitations or socio-economic affinities. The next step was the constitution of each province’s governing/administrative body – i.e., their respective Provincial Councils. On 21st September, 1835, it was decreed that the Provincial Council should be created two months later, and should comprise as many deputies as the number of judicial parties in each province.

The Decree specified many more interesting matters: “Every province will have one Council, with a civil governor or any other royally authorised head, who will be its President; an intendant or main head of the Royal Estate; one councillor for each judicial district in the province or for each territory with a judge of first instance; and a Secretary (without a vote) named by the Council. Capitals with more than one judge of first instance will be considered for this purpose to form as many additional parties as there are additional judges”.

Candidates for office were required to fulfil a number of requirements which would be considered questionable these days. They had to be over 25, receive a considerable income from territorial land or from industry, or be a lawyer, doctor or scientist (or someone who had studied some type of science). The idea was for the new deputies to be chosen from among the dominant classes. Renowned professionals, landowners or members of the feudal classes were deemed ideal candidates.

The origins of the Provincial Council of Málaga can be found in a written record of 20th December, 1835 (vol. 234, pages 326 and 327), which describes how the constitutive act was presided over by the first Deputy Mayor, Francisco de Sales Sánchez del Águila. The latter was accompanied by the second Deputy Mayor, Francisco Rebull and by a third Deputy Mayor, José María de Llanos, as well as by 13 aldermen and the 12 contributing Mayors of the city.

The relevant text read: “In accordance with Article 20 of the Provisional Royal Decree regarding the formation of provincial councils and in accordance with the wishes of the official communication of the civil governor, the election of four individuals took place. Those chosen were: José Mendoza, who received 21 votes; José María de Llanos, who obtained 21 votes; Ramón Narváez, who received 16 votes. Later, the two men who needed to belong to the Party Council were elected by secret vote: Miguel Crooke obtained 25 votes; and José Mendoza received 24 votes.”